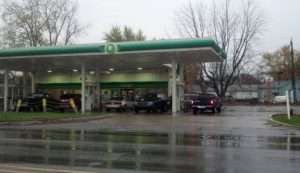 TAYLOR — A 78-year-old Southgate man unintentionally tried to pay for his gasoline purchase with a counterfeit $50 bill the night of March 14 at BP, 25775 Eureka Road.

The store employee said he detected the counterfeit bill immediately due to its rubbery texture, lack of a watermark and numbers in the wrong place on the back of the bill. The bill was confiscated by the police officers and taken into evidence.