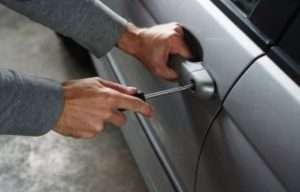 LINCOLN PARK — Two car door handles were reported damaged the morning of March 28, with visible pry marks, which left the doors inoperable, in an apparent break-in attempt, a 40-year-old man in the 1500 block of Washington Avenue reported.

The victim said the damage occurred between midnight and 8 a.m., and said he will forward any surveillance camera footage he discovers to the police detective bureau.