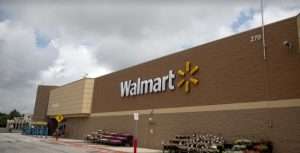 TAYLOR — A 31-year-old Detroit woman who had been banished from Walmart, 7555 Telegraph Road, in the past for riding a mobility cart around the store while consuming food for which she did not pay, was arrested and taken into custody April 3 for retail fraud and trespassing.

When confronted by police officers, the woman was verbally abusive and confrontational. She was searched, handcuffed and taken into custody. A record check revealed that she had other outstanding warrants, as well.