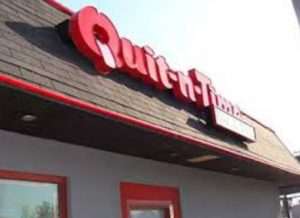 WYANDOTTE — A 51-year-old Taylor man was arrested for disorderly conduct, resisting arrest and for having open alcohol containers in a motor vehicle April 4 in the parking lot of Quit-N-Time Bar, 3353 Fort St.

The man, who was sitting in his vehicle in the parking lot, refused to turn down his loud music when asked to do so by an employee, and when he reached into his jacket as if to retrieve a weapon, the employee beat a hasty retreat and summoned police officers.

The responding police officers, knowing that the customer was no longer welcome inside the bar, asked the man, who smelled of intoxicants, how he planned to get home.

The man was belligerent, denied having a gun and was unable to calm himself. He unexpectedly opened his vehicle door, bumping a police officer.

During these actions, the man’s passenger decided to quickly leave the area on foot.

The man’s vehicle was impounded and towed, and he was taken to the police station, where he was booked and held. The entire incident was recorded on the police officers’ body worn cameras.