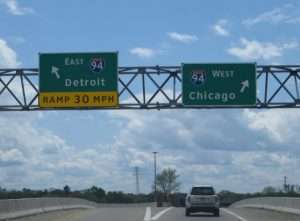 ALLEN PARK — Police officers following up on reports of a bicyclist who had been hit by a white sport utility vehicle, who was reportedly on the right shoulder of the southbound Southfield Freeway near I-94, at 3:38 a.m. on April 12, discovered the man to be drunk but unhurt.

The man, whose eyes were bloodshot and glossy, smelled strongly of intoxicants. He confirmed that a vehicle hit him, but said, “I’m all right – I am small but tough.”

He said he was trying to bike to Greenfield and Southfield roads, which run parallel and do not intersect.

Allen Park Fire Department medical personnel arrived on the scene, and the man answered their questions but refused medical treatment.

He was given a courtesy ride to Southfield and Warren roads in Detroit, and was cited for being a pedestrian on a highway.