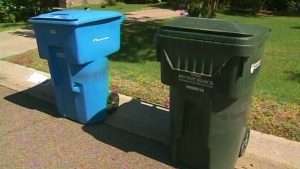 LINCOLN PARK — Both the trash and the recycling bins were reported missing April 5 from a residence in the 3900 block of River Drive.

The victim, a 55-year-old man, said he last saw the bins at 8 a.m. April 4 when he placed them curbside for emptying by GFL Environmental.

There were no suspects. The resident was given a police report number, and instructed to contact GFL for new waste and recycling containers.