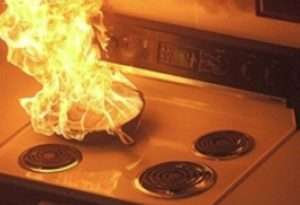 MELVINDALE — A police officer helped firefighters by keeping the curious at bay April 3 at the scene of a house fire in the 18500 block of Harman Avenue.

The police officer, who debriefed the resident, learned that she had been frying chicken in hot oil, which subsequently ignited the kitchen fire.