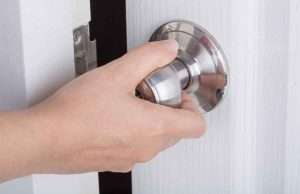 MELVINDALE — A strange man pulling on the front knob in an attempt to open the door frightened a woman April 2 in the 2800 block of Emily Street.

The resident was able to take a photo of the stranger, and the responding police officer recognized the man as someone they had encountered in the past.

Another police officer located the man, and warned him not to trespass on private property.

The resident was encouraged to call police officers if he returned to her house.