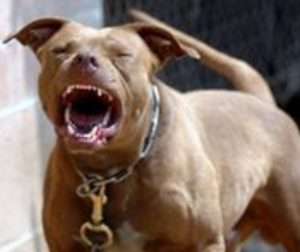 RIVERVIEW — A pit bull broke free from its backyard chain the night of April 2 and attacked a man walking along West Jefferson Avenue.

The man was knocked down by the dog before he fled to the bed of a nearby Ford Ranger to escape from the dog.

Neighbors said the dog has gotten loose and caused problems multiple times, which the owner denied.

The dog was registered with the city and is up-to-date with its shots. The owner was cited for having a dog at large.