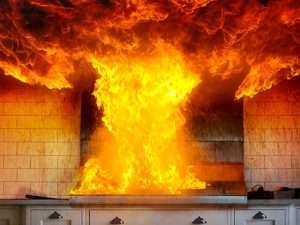 TRENTON — A police officer who was the first person to arrive at a reported house fire on Pinehurst Drive April 4 used a fire extinguisher from their patrol vehicle to temporarily extinguish the flames in an active kitchen fire.

The officer then returned to the occupant, an elderly woman, who was outside the house, and escorted her away from the dwelling. They later brought her to the car of a family member, who arrived to pick her up.

When the Trenton Fire Department arrived, the police officer briefed them, and they extinguished the reignited kitchen fire.