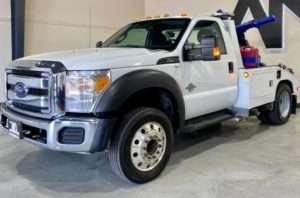 DEARBORN — A Detroit man who was speeding the afternoon of April 7 in a tow truck was taken into custody after it was discovered that he had an outstanding arrest warrant.

The man, who was driving 55 mph in a 35 mph zone on eastbound Michigan Avenue near Orchard Avenue, was subject to a traffic stop, during which his warrant was confirmed. He was taken to the police station and held.