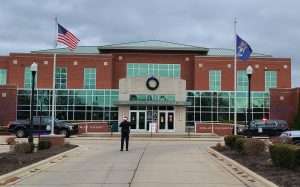 WYANDOTTE — The owners of a vehicle involved in a hit-and-run the night of April 16, in the 1600 block of 12th Street, said the damaged vehicle abandoned at a crash scene was stolen, despite evidence implicating them and a warning that filing a false police report could lead to criminal charges.

Police officers who responded to the crash learned that the vehicle hit the victim’s vehicle, which in turn hit a nearby house. After causing the crash, a man and a woman fled the scene on foot.

Police officers are collecting nearby surveillance video and witness accounts to ascertain who caused the crash. If the vehicle owners are found to be culpable, they will be prosecuted.