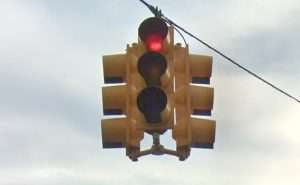 WYANDOTTE — A driver under the possible influence of narcotics ran a red light at 11:23 p.m. April 30 on southbound Biddle near Cedar Street, past a police officer waiting at the red light, prompting an immediate traffic stop.

The driver, a 24-year-old Detroit woman, continued to play her loud music, shaking her head and moving to the beat while in the driver’s seat, and had to be told to lower the music volume.

She exhibited other signs of impairment, and was arrested for operating while intoxicated and driving on a suspended license. She also had 12 outstanding arrest warrants.