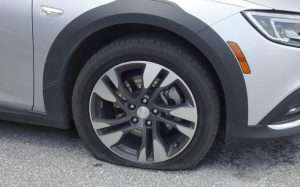 HEIGHTS — A traditional father who was upset that his son brought a woman to his residence who was not related to the family by marriage acted in out in anger the night of May 3 by using a screwdriver to puncture all four tires of the 2014 Chevrolet Cruze which the woman was driving.

The son, who had come to the house in the 5700 block of Amboy Street to pick up some belongings, refused to go to work with his father, which angered him.

The young woman with his son said she saw his father walk around her vehicle, but because it was dark, she did not initially realize that he was damaging the vehicle tires.

When police officers responded to the scene, the father offered to pay to replace the tires. However, the young woman’s parent, who owns the car, wished to press charges for the damage to the vehicle.

The young man’s father was charged with miscellaneous damage of property, and was told to contact 20th District Court for a hearing date.

The vehicle owner was given a case number for their insurance company, and the vehicle, with all its tires flat, was towed from the location.