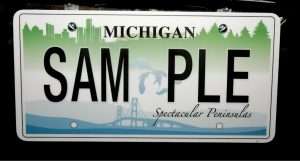 RIVERVIEW — An expired license plated led to a traffic stop on Fort Street at 12:05 a.m. May 8 for a driver with no vehicle insurance, a suspended driver’s license and multiple arrest warrants.

The man, a 23-year-old Ann Arbor resident, offered a U.S. passport as identification.

He had four prior arrests for driving with a suspended license. His metal license plate was destroyed, and a paper plate issued.

The man refused to take his citation, so it was put inside his vehicle, which was impounded and towed.