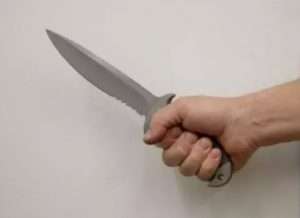 WYANDOTTE — A 31-year-old Lincoln Park man was arrested for felonious assault the night of May 4 in the 500 block of Superior Street following reports of an armed man intent on assault.

He had reportedly gone to the house of a 29-year-old man, with whom he had a physical altercation and whom he threatened with the knife.

The man, who was intoxicated, had a knife on him. He was disarmed and taken into custody.