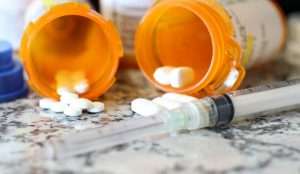 Police officers, following a report from a witness, found the man unresponsive, with shallow breathing, while behind the wheel of his vehicle, which had hit a fence.

A police officer shifted the vehicle to park and turned it off, then he and another officer removed the man from the vehicle and administered two doses of Narcan.

As the man regained consciousness, he admitted to taking drugs from a stranger.

When the police officers searched his vehicle, they found brass knuckles with a retractable knife in the driver’s side door. They also found a backpack with marijuana, a suspected Hydrocodone pill, Alprazolam and Methadone.

He was transported to Henry Ford Wyandotte Hospital for a blood draw, then was released into the hospital’s care.