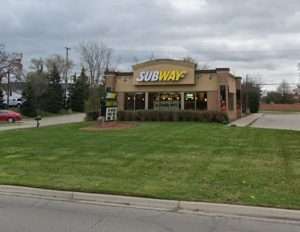 TRENTON — Three young Hispanic males threatened employees at Subway, 3041 Van Horn Road, the afternoon of May 14, and displayed a gun at the drive-through window.

An employee said that the men initially entered the store and were causing a disturbance. They then left the restaurant and went through the drive-through in an older model silver four-door sedan.

An employee said that the driver, a man with his hair in a ponytail, had a gun, and said to the drive-through employee, “You want to lose your life?” while “mean mugging,” which is facing someone with an intimidating facial expression, and then left.

The three men then returned about a half hour later, to the inside of the restaurant, paying cash for beverages.

One of the men hollered a challenge to fight someone, and then started throwing beverage bottles, yelling additional threats and jumping on the service counter.

They then exited the restaurant, knocking over a chip display and damaging the cart.