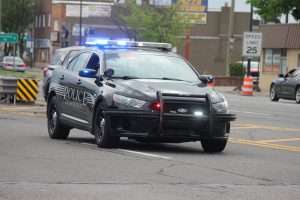 SOUTHGATE — A police officer terminated pursuit May 21 when the driver of a newer model Ford fled an attempted traffic stop by driving more than 100 mph on southbound Fort Street near Pennsylvania Road in Southgate.

The vehicle had tinted windows. The police officer was unable to read the license plate.

The vehicle was initially clocked at 79 mph in a 45-mph zone. When the police officer activated the emergency lights to initiate a traffic stop, the driver refused to stop, and increased their speed to 100 mph.

Due to the unsafe nature of the pursuit, the police officer terminated the chase near Fort and Hale in Riverview.