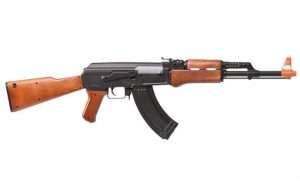 TRENTON — A teen and his airsoft gun were given a police escort home to a parent the evening of May 14 after police officers responded to a report that a man was walking along the railroad tracks with a long gun.

Police officers initially found the juvenile male without the gun, but later found an AK-47 style airsoft gun on a picnic table near the railroad tracks, along with a container of airsoft pellets.