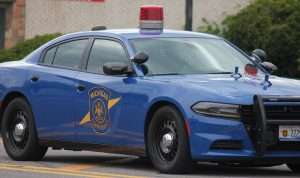 LINCOLN PARK — Michigan State Police troopers found a 33-year-old Grosse Pointe woman slumped over the wheel of a Dodge Journey in the right lane of southbound I-75, blocking the freeway, at 3:55 a.m. May 28 near Dix Highway, with an open liquor bottle next to her, according to the MSP Twitter page.

When the troopers approached, the women woke up, and drove away, nearly hitting a nearby firetruck while doing so.
The troopers immediately began to follow her with emergency lights and sirens activated, but the woman did not slow down or pull over, so they initiated a Pursuit Intervention Technique maneuver to bring the vehicle to a stop.

A PIT maneuver occurs when the pursuing vehicle strikes the fleeing vehicle on the side of the rear bumper, which causes the vehicle to turn abruptly sideways, forcing the driver to stop.

The troopers broke the glass of the driver’s side door window to reach the woman, and she was taken into custody without further incident. Both vehicles experienced minor damage, with no injuries occurring.

A preliminary breath was administered, and the woman had a blood-alcohol content more than twice the 0.08 limit for legally drunk in Michigan.

She was taken to Henry Ford Wyandotte Hospital for a blood draw, then was taken to the Detroit Detention Center, where she was held.