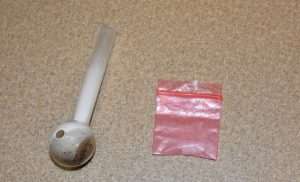 WYANDOTTE — A traffic stop initiated for an invalid license plate led to an arrest for driving without a valid license or vehicle insurance, and for possession of crystal methamphetamine and a crack pipe the night of June 3 in the 400 block of Biddle Avenue.

The driver, a 42-year-old Wyandotte man, who also had a counterfeit $20 bill in his possession, was taken into custody, while his passenger, a 38-year-old Gibraltar man, was released at the scene.