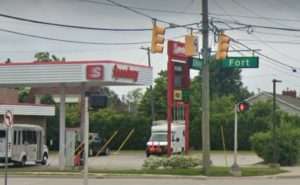 RIVERVIEW — A wallet was stolen from an employee at the Speedway gas station, 18799 Fort St., on June 2 when she accidentally left the wallet in the lady’s restroom after she changed into her uniform shirt prior to her shift.

Soon afterwards, she received notifications on her phone that her debit card had been charged at a nearby gas station.

Surveillance camera footage from Speedway shows a heavy-set white woman with blonde hair with dark roots exiting the restroom shortly after the employee left her wallet in the area. She drove off in a black Chevrolet pickup.

Police officers were attempting to get surveillance footage from the nearby gas station where the debit card was fraudulently used.

Also stolen with the wallet were the woman’s identification, her Pandemic Electronic Benefit Card, $20 in cash and several credit cards. She was given an identity theft packet and advised to cancel all the accounts associated with the stolen wallet.