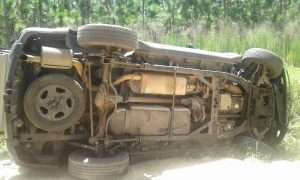 TAYLOR — Two men who were speeding at an estimated 120 mph on eastbound I-94 the morning of May 15 exited to Telegraph Road, ran the light, hit a guard rail and flipped over their 2000 Chevy Blazer.

Witnesses said two men, one white and one Black, pulled themselves from the vehicle and ran in opposite directions. A wallet belonging to a Dearborn Heights man was recovered at the scene. The vehicle was determined to belong to a Taylor woman.