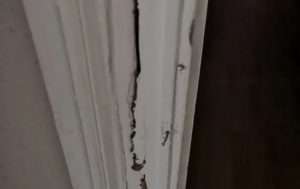 MELVINDALE — A television was reported stolen June 4 by an 81-year-old man living in the 3200 block of Northpoint Boulevard, who said he suspected the theft was the work of his 55-year-old drug-addicted son.

The victim said his house was broken into, with a door frame molding pushed in, after the house locks were changed in an attempt to keep his son out. He said he had moved in with his other son for the past two weeks because he was afraid of the drug-addicted son.

The responding police officer said that since the son has established residency at the location, the father would have to initiate a legal eviction process to get him out of the townhouse.