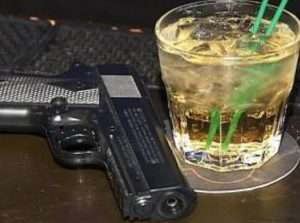 WYANDOTTE — Speeding, drunken driving and carrying a firearm while intoxicated resulted in the 12:21 a.m. June 10 arrest of a 49-year-old Detroit man on Fort Street near Walnut Street.

A traffic stop was initiated when the man was seen driving 60 mph in a 35-mph zone.

The man was carrying a 9-millimeter handgun tucked into his waistband, for which he had a concealed pistol license. However, Michigan law does not allow a person to possess a firearm while under the influence of alcohol or a controlled substance.