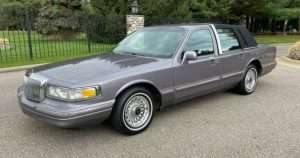 TAYLOR —A gray 1996 Lincoln Town Car was stolen the morning of June 5 from a 74-year-old man living in the 6800 block of Wilkie Street, while he was at church.

He said it was likely stolen by a 30-year-old drug-addicted woman who occasionally stays with him because they are friends, but she has never been allowed to drive his car.

Police officers noted that there was broken glass on the driveway, and a car window was likely broken to allow it to be stolen without the keys.

The car was not found at any of the low-rent hotels along Telegraph Road which the woman occasionally frequents.

The car was entered into the Law Enforcement Information Network as stolen.