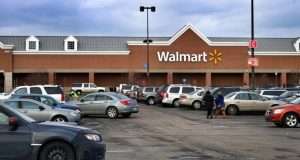 DEARBORN — A Detroit man was taken into custody for an unrelated active warrant June 7 after he was detained for shoplifting at Walmart, 5851 Mercury Drive.

Loss prevention employees said the man concealed clothing and food items in his backpack and a grocery bag before attempting to leave the store without rendering payment.

When police officers arrived at Walmart, the man was searched, then taken to the police station for booking, where he was held until he posted bond. He was advised to contact 19th District Court for an appearance date.