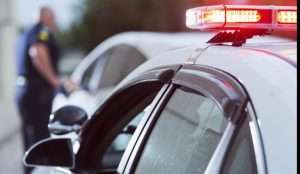 WYANDOTTE — A sudden lane change led to a license plate check, which revealed the vehicle was uninsured, resulting in a traffic stop the morning of June 7 in the 1200 block of Biddle Avenue.

The driver, a 57-year-old Wyandotte man, became upset when he learned his vehicle would be towed, and he became aggressive, verbally expressing his anger. When he started to walk away, an officer tried to calm him down, but he shoved the officer, resulting in a resisting and obstructing charge.