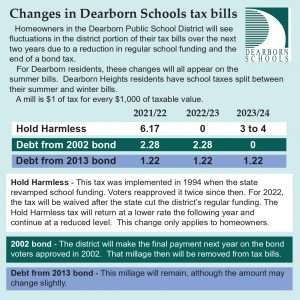 DEARBORN – Homeowners will see a decrease in the school portion of their property tax bills this summer, and will see a lower rate next year, due to district general fund reductions.

In a June 22 release from the school district, Tom Wall, executive director of Business Services and Operations, said that a complicated change in the way in which Dearborn Public Schools receive state aid will decrease the district’s per pupil funding by several million.

He said that, as a result, Dearborn homeowners will see a decrease in the school district portion of their property tax bills this summer, and in July 2023 they will see a new, but lesser millage take effect.

Wall said the change from the state caught the district unaware.

“We had budgeted for an increase in general fund revenue from the state, but then discovered that we actually were facing $4 million less in unrestricted revenue,” he said.

Wall said that the tens of millions in COVID relief funding that the district is receiving may only be spent in limited ways, and general fund revenue from the state covers salaries, utilities and supplies.

To understand what happened, a history lesson is in order. In 1994, the state of Michigan passed Proposal A, which revamped school funding statewide. Dearborn and about 50 other school districts around the state were allowed to keep their Hold Harmless millage, which let the city use a portion of local property taxes so they could keep the higher per pupil funding, which school district voters had approved in the past, and which was subject to reapproval every decade.

Wall said that last year, when the legislature approved a $171 increase in per pupil funding, it was thought that the district would have $8,951 in funding per student, with an increase in $3.4 million for the district.

However, he said that buried in the wording of the of the new state budget was a requirement which required that to get that extra funding, the three dozen districts like Dearborn that still had a Hold Harmless millage had to reduce it to be eligible.

Wall said this reduced the amount of money Dearborn Public Schools could collect by $7.4 million.

Wall said that when doing the math, it meant that the $171 per student increase in state funding cost DPS $281 per pupil, due to the mandated decrease in Hold Harmless funding.

He said Dearborn residents pay all of their school taxes on their summer tax bills, so when the state law was signed in September 2022, the local taxes already had been collected.

He said that to rectify what turned out to be an overcollection on the last tax bill, the district’s 6.17 mill Hold Harmless tax will not be on the property tax bills for school district homeowners this year in Dearborn and in Dearborn Heights.

Wall said non-homestead properties will still pay the full 18 mills, although this year they will not see part of that broken out as part of the Hold Harmless millage.

He said that, additionally, the city of Dearborn’s 3.5 tax mill, which is separate from the school district, is no longer on their property tax bill, after voters failed to renew the city millage at a lower, 2.75 mill rate.

Wall said a school bond, for 2.28 mills, approved in 2002, will be paid off this coming year, and will be removed, while a 1.22 school mill approved in 2013 will remain on the property tax bill for several more years.

He said that COVID relief funding, the Elementary and Secondary School Emergency Relief Stabilization funds, which run for the next two years, were allocated for building and site funds, and to pay for positions like social workers, which freed up those district funds to be used in other areas.

However, Wall said in two years, the district will need to find another way to cover the cost of its infrastructure needs.

He said that since ESSERs may be used on heating, ventilation and air conditioning work, the district plans to use most of its funds to air condition select schools.

Wall said that current plans call for cooling systems to be added at eight elementary schools: DuVall, Long, Howard, Haigh, Nowlin, Oakman, Snow and Whitmore-Bolles, with a projected cost of more than $4 million per building. Significant increases in construction costs may remove some of the schools from the list.

He noted that the state has still not established a school funding budget for next year, and that state revenues account for 80 percent of the school district’s general fund revenues.

“Obviously, our budget cannot be more than our best guess since we do not know what funding we will get from the state, either in per pupil foundation allowance or in special categories, and state funding makes up the majority of our revenue,” Wall said.