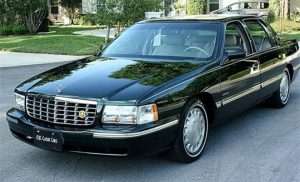 MELVINDALE — A catalytic converter from a 1997 Cadillac DeVille was reported stolen June 21, from the parking lot of Tomboy Liquor, 18800 Dix Highway, where the car was parked with a for sale sign on it.

The vehicle owner, a 65-year-old man, said he usually only parks the car there during the day, with the shop owner’s permission, but he forgot to drive the vehicle home on June 19, and left it there overnight. On the afternoon of June 20, when he went to drive the car back to his residence, he heard a loud noise, and discovered that someone had removed the car’s catalytic converter.

An employee at a local scrap yard said they did buy a catalytic converter in the time frame, but the scrapyard owner hastily denied doing so.

The victim said the owner of the liquor store will review his surveillance camera footage and will see if he can find any images of the thief.