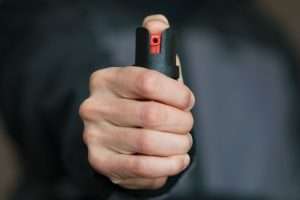 WYANDOTTE — A drunken 27-year-old Lincoln Park man was arrested at 1:48 a.m. May 1 outside a bar in the 100 block of Oak Street for disorderly conduct and resisting and obstructing the police.

His problems began when he allegedly spit alcohol at a bartender and refused to leave the business. When police officers arrived at the scene, they found the man in an alley, still determined to get back into the bar.

Despite the police officers’ attempts to de-escalate the situation, the man was resistant and uncooperative, dropping to the ground, and thrashing around when the police officers tried to restrain him. After shouting profanities and elbowing a police officer, chemical deterrent spray was used to subdue the man so he could be taken into custody. He was transported to the police station, where he was booked and held.