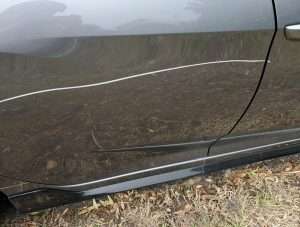 The complainant said her boyfriend’s vehicles were scratched over the weekend while they were parked in her driveway. She said she suspects that her ex did the damage, but she has no proof to support her suspicions until she checks the footage on her neighbor’s surveillance camera.