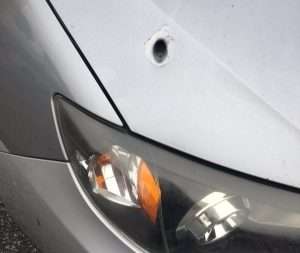 SOUTHGATE — A bullet fired off the night of July 4 damaged the hood of a 2014 Ford Mustang while it was parked in the 14000 block of Pennsylvania Road.

The bullet was lodged between the first and second layer of the car hood, and was intact. It was removed by the responding police officer and taken into evidence.

The vehicle owner said his residence had been surrounded by fireworks, and he is unsure of the origin of the gunfire.