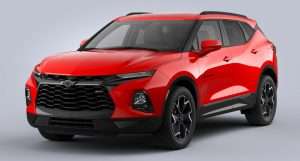 ALLEN PARK — A drunken driver in a red 2020 Chevy Blazer, who was reported by multiple callers as being “all over the road,” was arrested July 3 for operating while impaired on southbound Southfield Road near Fox Avenue, and for failing to provide proof of insurance.

The woman, who was swerving and unable to maintain her lane of travel, said she had just left a concert. She smelled strongly of intoxicants, and her eyes were glassy. She admitted to drinking, and failed some of her field sobriety tests.

A preliminary breath test was administered, and the woman had a blood-alcohol content of 0.123, more than one-and-a-half times the 0.08 limit for legally drunk in Michigan.

Her vehicle was impounded and towed, and she was taken to the Allen Park Police Department, where she was booked and held.