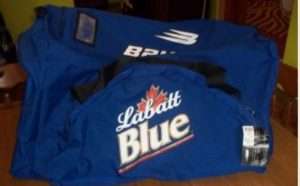 SOUTHGATE — Ice hockey equipment, tools and cash were reported stolen the morning of June 28 from an unlocked Ford vehicle parked overnight in the 18000 block of Walnut Street.

The victim said about $50 in loose change was missing from the console.

Among the tools taken were a DeWalt impact drill, a DeWalt regular drill, a circular saw and Craftsman screw and nut drivers.

The estimated value of the stolen items was about $1,675, the victim said. There were no suspects.