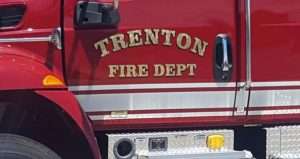 TRENTON — A fire in a train trashcart the afternoon of June 21, near West Jefferson Avenue and Van Horn Road, created black smoke near the adjacent mobile home park.

A  Canadian National Railroad employee near the railroad tracks said a CN supervisor was on the way just as Trenton firefighters arrived and began to extinguish the blaze.

The CN supervisor said workers were doing a “roll by” in a train when they discovered the trash cart fire on the adjacent railroad tracks. He said he would be responsible for the fire followup.