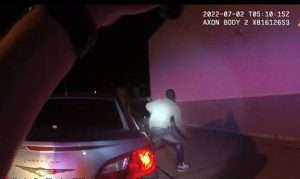 WYANDOTTE — A passenger in a vehicle subject to a traffic stop tried to flee on foot while in possession of a loaded handgun at 1:09 a.m. July 2 on St. John Street west of Biddle Avenue.

The 21-year-old Detroit man was one of five adults in a vehicle with heavily tinted windows. When the vehicle stopped, he exited the vehicle, ignoring the police officer’s commands to stay seated inside.

A foot chase ensued, with the man abandoning a black ski mask as he ran for several blocks, jumping fences and maneuvering through alleys until police officers were finally able to apprehend him.

“Based on the circumstances – possession of a ski mask in the month of July, illegally concealing a loaded firearm and running from the police –  a reasonable person can conclude that this individual was preparing to commit an armed robbery in the near future,” he said. “These brave officers prevented a violent crime before it had a chance to take place.”