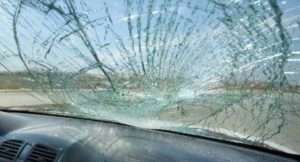 TRENTON — An angry wife smashed the windshield of her unfaithful husband’s 2000 Jeep Cherokee shortly after midnight June 27 after she drove to his girlfriend’s residence to confront him.

The man, who admitted to his infidelity, said he did not want to press charges, but he did want his wife to pay for the replacement windshield.

The wife also rear-ended her husband’s Jeep with her vehicle, causing minor damage to both.