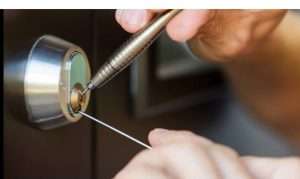 SOUTHGATE — A female dog walker and her cautious canine were frightened shortly after midnight July 24 by an older man who stared at them from a bench when they went for a late-night walk, after which he tried to pick the door lock on her residence.

When the woman heard the lock jiggling, and saw the man through the peephole, she warned him that she was calling for police officers, and vehemently demanded he leave.

After a verbal response about his lock picking skills, he backed away from the door and left the area.