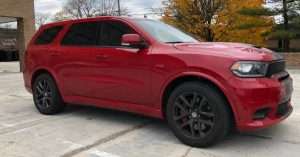 MELVINDALE —An illegally tinted front window of a red Dodge Durango triggered a traffic stop at 2:47 a.m. July 21, on westbound Outer Drive near Harmon Street, which resulted in the driver being cited for driving without vehicle insurance and without a valid license.

The passenger, who said she was the registered vehicle owner, was allowed to drive the vehicle from the scene.

The cited driver was told to contact 24th District Court for an appearance date.