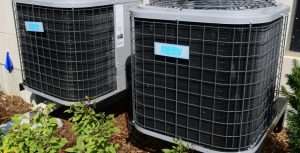 ALLEN PARK — Three business-size air conditioners were reported stolen July 21 from the rear of a commercial building on Allen Road, which a new owner is renovating.

The building’s new owner said the theft occurred between July 16 and 19, and on July 19 a worker she hired in the past called her and said two strangers were on her property and he “scared them away.” She said the phone call was odd because he had no reason to be near the business, and she thinks he might have stolen the units himself. She provided information about the worker for the police report.