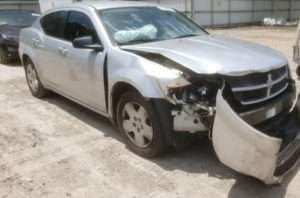 MELVINDALE — A woman who struck a parked Lexus the evening of July 30 with her Dodge Avenger in the 19100 block of Hanna Avenue was cited for operating while intoxicated, failure to use due care and caution, thus causing an accident, and with being a minor in consumption of alcohol.

A witness saw her pull out of a nearby school parking lot, squealing her vehicle’s tires, after which she swerved and hit the parked car at a high rate of speed.

The driver claimed she was being shot at by another driver, but there were no bullet holes in her vehicle, and no witnesses reported hearing shots fired.

The woman admitted to having some shots of liquor at a friend’s house before attempting to drive home. She smelled of intoxicants, and failed standardized field sobriety tests.

A preliminary breath test was administered, and the woman had a blood-alcohol content of 0.21, more than two-and-a-half times the 0.08 limit for legally drunk in Michigan.

She was arrested and taken to the Dearborn police station, where she was booked and held.