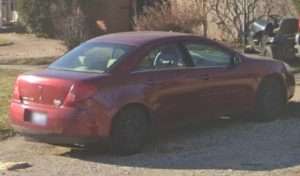 TAYLOR — A red 2008 Pontiac G6 stolen July 29 from a residential driveway the 5900 block of Beech Daly Road in Taylor was recovered a day later in Romulus with heavy front end damage after it was involved in a hit-and-run crash in which the driver fled.

The victim, a 30-year-old Taylor man, said the vehicle, which was paid off but uninsured, had been subject to lost or missing keys a week prior to its theft.