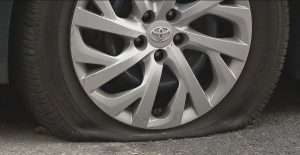 MELVINDALE — The left back tire of a vehicle was slashed July 30 in the 3600 block of McKitrick Street.

The victim said he saw a male neighbor near his car after he pounded on his door, to which he did not respond. He said he talked to the father of the man, and was advised that he is not in his right mind.

There were no nearby surveillance cameras.

The police officer who compiled the report recommended that the current incident and any future vandalism be documented, and encouraged him to call police if he sees the neighbor on his property in the future.