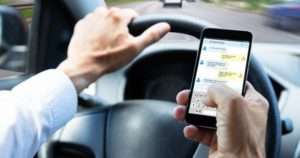 DEARBORN — A traffic stop initiated for distracted driving the night of July 30 resulted in the arrest of a passenger for outstanding warrants.

The driver, a 32-year-old Dearborn man, was looking at his cell phone while driving west on Ford Road near Evergreen Road, which resulted in him swerving in an unsafe manner.

During the traffic stop, a record check of the front seat passenger revealed that the 34-year-old Detroit woman had multiple warrants for her arrest. She was arrested and taken to the police station, where she was booked and held until she was released on bail.

The distracted driver was cited and released at the scene.