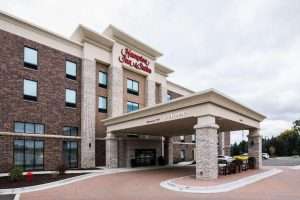 ALLEN PARK — A hotel guest who stole approximately $100 in cash, and cigarettes, from the unlocked car of a manager at the Hampton Inn, 16400 Southfield Road, the morning of Aug. 20 was taken into custody after police officers used surveillance footage to find her hiding behind a trash bin.

She and a man in her room were evicted from the hotel, as well.

The women had several active warrants for her arrest. However, after being booked and cited for larceny, she was released due to health concerns, since she did not have her medication with her.