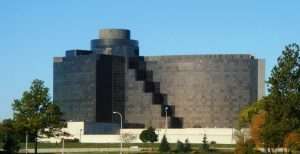 DEARBORN — A security guard at the Edward Hotel, 600 Town Center Drive, reported the morning of Aug. 18  that a trespasser, who seemed disoriented, refused to leave and claimed he had a right to be there.

When police officers spoke to the man, who had entered the hotel lobby, which should have been secured, he seemed delusional, claiming he owned the building.

A check of the man’s name revealed that he had several active arrest warrants, so he was taken into custody, booked and held pending release.