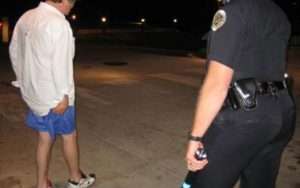 RIVERVIEW — A 27-year-old Lincoln Park man was arrested at 2:11 a.m. Aug. 13 for operating under the influence of alcohol and interfering with a police officer after a traffic stop was initiated for speeding on Fort Street near Williamsburg.

The man, who was driving 63 mph in a 45-mph zone, smelled of intoxicants, and his eyes were watery and glossy.

The field sobriety tests continued, with the man unable to perform the requested maneuvers. He then refused to take a preliminary breath test at the scene.