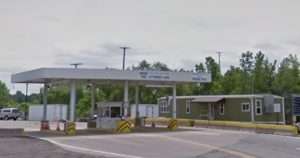 RIVERVIEW — A 63-year-old Grosse Ile Township man said a bug flying inside his 2021 Cadillac XT6 the evening of Aug. 21 caused him to crash into a barrier wall on Bridge Road east of Jefferson Avenue, near the approach to the Grosse Ile Toll Bridge.

A toll booth worker, who witnessed the crash, said the driver was approaching the tollbooth when he suddenly drove his Cadillac into the concrete barrier wall.

The driver, who smelled of intoxicants, admitting to drinking alcohol earlier. He was unsteady on his feet and slurring his words. He failed multiple standardized field sobriety tests, and while he was being read his preliminary breath test rights, he lost his balance, and landed on his back, hitting his head on the ground.

Paramedics then braced his neck and loaded him onto a stretcher, and he was taken to Beaumont Hospital, Trenton, for treatment, and where a blood draw was performed in accordance with a search warrant.

He was charged with operating under the influence of liquor, and his vehicle was towed from the scene.